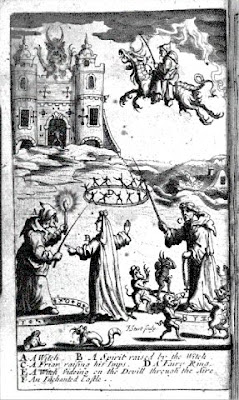 Isobel Gowdie: red head, fire brand, Queen of the Scottish Witches. She claimed to be in the good graces of the Queen and King of Elphame and that she could shape shift into a hare or cat. She used her broom to replace her presence in bed while her husband slept and climbed corn and bean stalks in order to fly with the intonation of a chant. It is 1662, April 12th that she had been arrested and accused of witchcraft. In the next six weeks, she would make her confessions: four of them, without torture or duress. Why would she do this? Is it possible her anger got the best of her and she figured herself and her coven mates dead women any way? May as well go out with a good scare to the common folk??? Who knows, but her claims certainly shook the community and her name carried down in song, book and poems for centuries to come. Only Isobel knows and she's not talking any more.
She was the daughter of a lawyer whom changed religious affiliations so that he may continue practicing his livelihood.  Originally the family was Catholic. She was expected to marry well however her father encouraged her to marry someone who was an improper match for her especially in the light that she was fleeing her marriage bed to practice witchcraft. It is also revealing that he never noticed, whether it be enchantment or not. Many of the things cited by Isobel's confessions seem to be congruent with shamanic traditions and visions gained through those experiences. Ie. . . transformation into a hare or cat, flying through the air, meetings with the Queen of Elphame. All of these things point of a tradition that came from a Pre- Christian era.
There is no doubt in my mind that even though she could transform herself into a fluffy bunny, she was definitely not what we would call a fluffy bunny. She proclaimed to have cursed her Land lord after she spurned off unwanted advances. He refused to repair her hearth and barn as he was obligated to do as a land lord, then began to speak ill of her publicly and to the local pastor. That would tick off anyone! Well what she claims to have done was cause this man to have no sons using a clay poppet of a baby boy. According to records, it seems to have worked. How very biblical of her. In another case she claims to have cursed the local pastor with a wasting disease. He survived and was present during her confession. Imagine the shock and horror that must have sunk into this man. The real question is this: were they shocked because witchcraft seemed to be well and alive or were they shocked because they never expected reprisal for their own ill deeds? 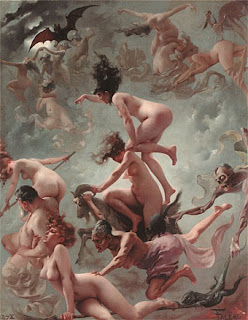 During this period of time, I find in most references to witchcraft the use of the words devil and demon. It is probably so because during this time if it wasn't God or Jesus, it MUST be of the devil. It's just how it was. They had no access to any other information about world religions, they were completely reliant on their priests and preachers to deliver the entirety of their beliefs. It is no wonder to me that those who presided over her trials thought her mentally off kilter. . . of course they would. Shamans have the propensity to swim in waters that madmen drown in. To a Christian man in charge of the entirety of his realm, everything that came out of Isobel's mouth would seem to be completely insane. Except for there were certain things she claimed that had fact to back it up. After all the Land lord did lose all sons alive and had no more and the pastor indeed had been very ill with a wasting sickness.
What makes a woman like Isobel turn to witchcraft? Isobel was refined, beautiful and well educated. Maybe it was because every other factor of her life was controlled by men: her father put her in a mismatch marriage, her husband was obviously not very attentive and required her to toe up to a line she wanted nothing to do with. Her land lord was putting the moves on her and when she refused them, he slandered her and refused to live up to the terms of a good land lord to spite her. On top of that, she was forced to bear witness to brutal battles in which there was nothing she could do but watch. Her religion certainly wasn't going to empower her and as most students of witchcraft knows. . . a teacher shows up when one is most ready to learn. Isobel Gowdie by the time she met her friend, Margaret Brodie, was more than ready to take command of her own life. In fact, she had some scores to settle and settle she did.
I think one of the most predominant reasons why witchcraft was horrifying ( and this is just my opinion) to men back in the day is because they were truly afraid of the reprisal for the wrongs they had committed against people back then. They wanted to hold their power and look like saintly people too. In other words it was all about having and eating cake. Witchcraft complicated things for them. Witchcraft was also a convenient tool to wrest power and land from others in the name of godliness without looking like they were in the wrong. In fact, with the exception of Isobel Gowdie and her conveners, most of those prosecuted and killed as witches were in fact political victims. They were inconvenient and in the way of power lusting men and clergy. 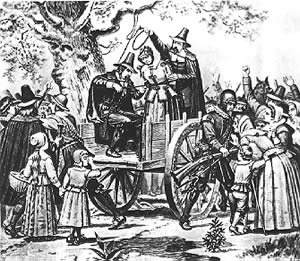 There are no records that show her execution, however there are rumors that she was hanged then burned for good measure.
http://www.sussex-academic.co.uk/sa/titles/history/wilbygowdie.htm
http://en.wikipedia.org/wiki/Isobel_Gowdie
http://www.witchvox.com/va/dt_va.html?a=ukgb6&c=words&id=14052
http://www.witchvox.com/va/dt_va.html?a=ukgb6&c=words&id=14052
Posted by Unknown at 11:04 AM